Hey, what do elephants have that nothing else has? That’s right BABY ELEPHANTS. Here are some of the stories we missed while I was saving this photo to my desktop! 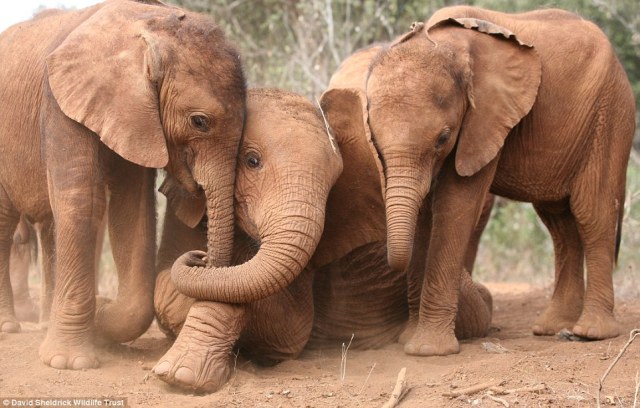 + Black Girl Dangerous is putting together an Editor-In-Training program for queer and/or trans people of color! Submit your application by August 31, donate to the project if you can, and share share share:

Many of us who have the most to contribute to important conversations happening in indie media, including conversations on race, gender, queerness, economic injustice, disability justice, issues affecting youth, etc., have the least amount of access to the training, education and experience needed to be successful in contributing to and leading independent media movements. Continuing our commitment to amplifying the voices of queer and trans people of color from all walks of life, BGD will train queer and/or trans people of color in online media editing and writing over 6 months. Participants will learn the skills necessary to write well for the web while also learning to effectively edit the work of other writers, to contribute to and build quality platforms. Participants will have the opportunity to write and edit for BGD, and to carry those skills into their own future indie media projects.

The Editor-In-Training program will take place in a virtual classroom (via email, Skype, etc.) and be facilitated by the editors of BGD. Participants will be expected to devote at least 5 hours per week to the program. The program is funded by BGD and will be free for participants.

+ The 2014 Fields Medal — math’s equivalent to the Nobel Prize, people — was given to Maryam Mirzakhani, a professor at Stanford University. Mirzakhani is the first woman to receive the Fields Medal in the 80 years it’s been awarded. Stanford described her work as “sophisticated and highly original contributions to the fields of geometry and dynamical systems, particularly in understanding the symmetry of curved surfaces, such as spheres, the surfaces of doughnuts and of hyperbolic objects.” Donughts!

“This is a great honor. I will be happy if it encourages young female scientists and mathematicians,” Mirzakhani said in a statement on Stanford’s website. “I am sure there will be many more women winning this kind of award in coming years.”

In the statement, she said that as a young girl she dreamed of becoming a writer. But by high school, math problems and proofs had caught her attention. 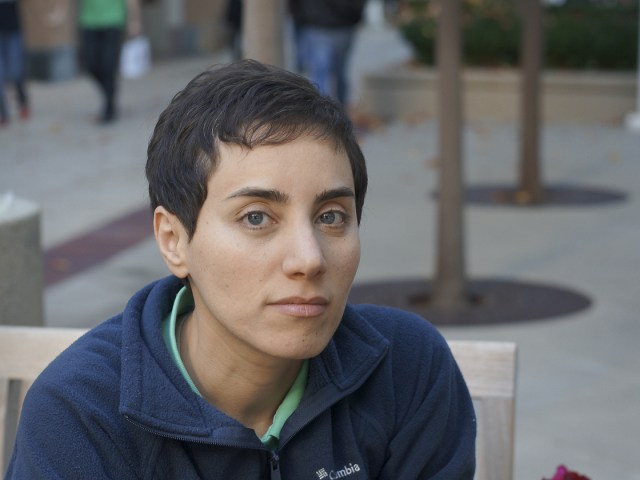 + Taylor Hatmaker (an Autostraddle Contributor!) has a brilliant piece on the importance of coming out when you’re in a position of power, and the implications of staying in the closet. Why Tim Cook Needs to Come Out:

Ultimately, if you have the power to be an extraordinarily potent positive figure in and beyond the LGBTQ community, my expectations adjust to the height of your podium.

If the CEO of Apple has something to be afraid of, it sends a message that those of us in far more disempowered positions must be downright screwed. If shareholders are scary, what do we make of someone brave enough to live their truth in central Africa?

+ Forty prominent feminist writers (Roxane Gay, Sady Doyle, Anna Holmes and Aminatou Sow, to name a few) are rereading Susan Faludi‘s Backlash: The Undeclared War Against American Women this summer and talking about it, one chapter at a time, for Matter’s Backlash Book Club. If you’re not already on board, get there. Here’s Irin Carmon from the intro piece, Welcome to the Backlash Book Club:

Backlash had more to it than factoids. It was a cogent, forceful repudiation of the entire decade of the ’80s, mostly in the form of media criticism and pointed follow-up reporting. “The truth is that the last decade has seen a powerful counterassault on women’s rights, a backlash, an attempt to retract the handful of small and hard-won victories that the feminist movement did manage to win for women. This counterassault is largely insidious: in a kind of pop-culture version of the Big Lie, it stands the truth boldly on its head and proclaims that the very steps that have elevated women’s position have actually led to their downfall,” Faludi wrote.

The charge was that too much liberation had caused women unhappiness, going against their true natures. The remedy was a return to domesticity and “traditional marriage,” a message Faludi says was drummed in by the press and popular culture, as well as the rollback of what gains women had managed to make in reproductive freedom, workplace equality, and political representation.

+ Shark Week is a pathetisad ghost of its former self, the Discovery Channel is only interested in ratings, and no one is happy about it. Here’s Christie Wilcox:

Though Monday’s Jaws Strikes Back proved worthy of the science stamp I awarded it, any respect gained by the special was quickly lost by the program that followed. Monster Hammerhead claimed to follow shark scientists as they sought to tag the legendary large hammerhead off of Florida named Old Hitler, however, fear-inducing language set the tone and the program misrepresented not only the work being done but also the animals being studied. Worse, the scientists that appeared on the show were tricked into filming.

She also supplies a Shark Week viewing guide focused only on the actual science-based programming, plus a NatGeo antidote to the whole damn thing.

+ L Word Mississippi: Hate the Sin debuted on Showtime and we were all so concussed from the experience that we couldn’t even bring ourselves to feel around for the home keys so we could talk to you about it. Lucky for YOU, our esteemed Contributing Editor Kate is working on an assessment of this documentary as we speak, which she will share with you very soon!  You can get up to speed and catch L Word Mississippi tomorrow night and Saturday night, and a bunch of other nights all the way through September 9. 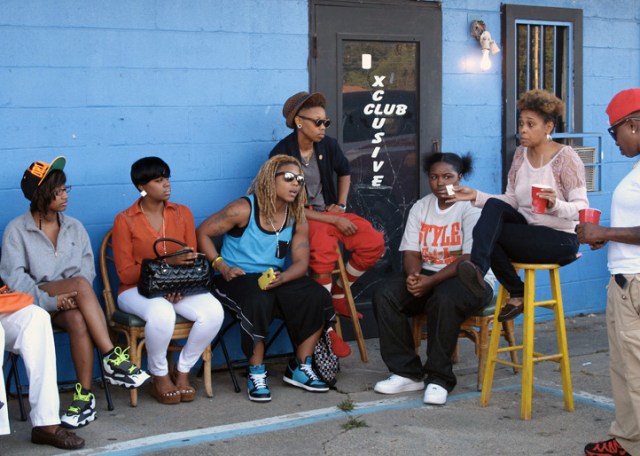 + Latina women are the most underrepresented and hypersexualized characters in Hollywood and there’s a study to prove it! Nothing about this isn’t fucked up:

Hispanics are dramatically underrepresented and hypersexualized. In contrast to the representative numbers on black and Asian characters, only 4.9% of speaking characters in the years surveyed were Hispanic. Compare that to the 16.3% of the US population that is Hispanic — and the fact that Latino moviegoers buy 25% of all theater tickets — and the numbers are appalling.

Nora Ephron was working on a big-screen adaptation of the series [Lost In Austen] in 2012 before she died, and now—according to Variety—Portlandia‘s Carrie Brownstein is taking over where she left off. While the original TV series had the advantage of actually taking place in the same country as Pride And Prejudice, the movie version will move the protagonist to Brooklyn. Presumably that means Mr. Darcy will be charmed by her unusual American accent, her thick-rimmed glasses, and her delightfully witty fixie bike.

+ Bitch had a great analysis of Kristen Stewart‘s new film, which is quite relevant to your interests. There’s a spoiler at the top so don’t say I didn’t warn you!  Highbrow No Homo: The Art of Queer Representation in “Clouds of Sils Maria”

Clouds of Sils Maria is about as highbrow as commercial cinema gets. It’s a meta three-part film by a French director. It stars Juliette Binoche. No surprise, it’s currently without a US release date.

But the film has been getting lots of attention in Europe—it premiered at Cannes a year after writer/director Abdellatif Kechiche’s Blue is the Warmest Color took home the Palme d’Or, amid controversy. Like that film, director Olivier Assayas’ Clouds of Sils Maria is a story about female queerness directed by a straight man. In both films, queerness is much less a fixed identity than it is a metaphorical vehicle through which the directors can make grand, sweeping commentaries about Life and Youth and Beauty—and, above all, Art.
Clouds of Sils Maria hits the international festival circuit this summer and fall, I question whether or not it truly counts as queer representation.

When Betty visits the ladies room during a double date, Helen is close behind. She makes her move, tenderly kissing Betty on the lips.

“You can’t do that,” Betty protests.

“I just did,” Helen says with a sly smile.

All The Irritating Gay News That’s Fit To Link

Hm, not much apparently? Hooray!

At the same time, many conservatives have moved away from advocating for ex-gay therapy and are instead promoting messages of celibacy. Rather than encouraging people with same-sex orientations to “change” and try to live a heterosexual life, religious groups that condemn homosexuality are increasingly suggesting that to be right with God, people don’t have to disavow a gay identity, but commit to never acting on it.

+ Because clearly she was put on this planet to brighten the lives of everyone around her (among other noble things), Samira Wiley went ahead and posted this picture on her Insta.