Good day to you, fellow space travelers! I’m writing this on Thursday night, next to a Kerr jar filled with freesia and a glass of organic red wine because that’s what happens when you get married. You just get freesia as soon as it’s in season. No one tells you that because a) it’s wrong to get married for the freesia alone, and b) they know that if more people got married, there wouldn’t be enough freesia to go around. I, on the other hand, love you dearly, as if you were my own sister or otherwise-gendered familial entity, so I will tell you these things. You don’t get wine for being married, though. That comes with having kids.

+ DapperQ is giving away tickets to an upcoming Anna/Kate album release party! Anna/Kate is a queer folk-pop band that you will certainly love a whole bunch, and you can hear their song “Find Your Beautiful” right this very minute:

+ Support the first ever Lesbians Who Tech on a Plane, European Summit!

+ There’s gonna be a Saint Harridan pop-up shop in Dallas this weekend! Never thought about it before, but silent films of queers trying on clothes on the side of country highways is EXACTLY what I need in my life.

+ Register for The LGBT Family Building Expo happening in NYC on May 9!

+ Call for writers! Bitch Flicks’ theme week for April is Fatphobia/Fat Positivity in film, so you should write something brilliant and send it to them so I can stick it in an upcoming AAA and you will be so full-circle I’ll probably get dizzy.

+ Pacific Standard is doing a series called The 30 Top Thinkers Under 30, and it’s very enjoyable. Here’s a profile of Lydia Brown: The Self-Described Queer, East Asian Disabled Person Devoted to Defending Anyone on the Margins.

+ Mary Emily O’Hara took our Lesbian Sex Survey results to some experts, like Felice Newman, and then put together this really fucking comprehensive article that we couldn’t get enough of. Rejoice, Lesbians: ‘Bed Death’ Isn’t Actually a Thing.

Newman was impressed with the range of the Autostraddle study and said that previous research has often overlooked the frequency rates of sex in lesbian relationships. That could be partly to blame for the persistence of the LBD myth.

Is it every day that Felice Newman is IMPRESSED with the RANGE of your study? No, reader. No it is not. BOOM.

+ I wish I could tell you how much my family loves Robin Roberts, but I suspect you already know, because I’m guessing that your family also loves Robin Roberts with the fire of a thousand suns, ESPECIALLY if you’re from the South. I’ve never been so excited about an AARP Magazine cover story, that’s for sure: Robin Roberts on Celebrating Her 50th With Her Partner, Hurricane Katrina, and Surviving.

+ Ok REAL TALK I missed this when it first happened because I was planning my AFOREMENTIONED WEDDING IN WHICH I WAS MARRIED and it popped onto my radar this week and I was like, what is this precious thing? I’ll tell you what it is, reader, it’s a motherfucking GIFT is what it is. If you haven’t already seen Kristin Russo talk with her mom Rose about what it was like when she came out, do yourself a big favor and watch it now. Sometimes our lives are crazy — we’re planning parties or refinishing floors or training crows to bring us shiny things — and we miss out, reader. We miss out on videos like this one, or the one that’ll play directly after it, where Dannielle Owens-Reid talks with her dad, Jack. But don’t let anyone tell you that you can’t catch up on videos, because you can. We all can. Just have some tissues handy because you are going to cry so hard.

+ Michelle Dowell-Vest has an interview with Aisha Moodie-Mills on politics, race, and the LGBTQ movement.

+ This Black Trans Man, Ky Peterson, Is in Prison for Killing His Rapist.

+ Jenika McCrayer has Five Ways to Take Care of Yourself While Working in the Service Industry (and Five Ways to be a Better Consumer).

+ Purveyor of amazing underthings that I love, Dear Kates is talking about the first time you got your period in their latest campaign, First Time. I want to hang out with everyone in this video.

I’ve never talked to you about Dear Kates on a personal level, even though I own some and wear them every month and believe they are the best underwear on this sweet little planet of ours. Do you own some Dear Kates? Are you obsessed with them?? Don’t they come in the most special packaging?? DO YOU LOVE THIS NEW CAMPAIGN?! Ugh I do so much. Go to Dear Kates and scroll down for even more stories about people’s first period.

+ Sweet mother of Abraham Lincoln, this article is AMAZING. Lisa Hix‘s Jem, the Truly Outrageous, Triple-Platinum ’80s Rocker Who Nearly Took Down Barbie is from last summer, but Bust recently unearthed it and if you missed it the first time around you HAVE to read it now. The first comment is from someone on the Jem design team! Y’ALL.

+ Dayna Evans will now teach you how to get Haim hair so you can be the fourth Haim sister and live the life you’ve been dreaming of. This is the best hair article that’s ever happened I think?

+ In England, No One Can Stop Women’s Soccer.

+ The Power of an All-Woman Mariachi Band.

Mariachi is “passed on from generation to generation,” says Mireya Ramos, a musician who lives in New York City. “It’s very traditional and very macho.” Ramos tells filmmaker Jenny Schweitzer that she had “negative experiences” with other bands—that is to say, with the men who performed in them—and decided to form Flor de Toloache, a seven-piece, all-women mariachi group. “For people who are used to seeing men play, we’re making a statement. We’re breaking that concept,” says Shae Fiol, a band member.

+ Your girl Mari Brighe has this piece up on The Daily Dot! What Dove’s Viral Beauty Campaign is Really Selling Women.

+ USPS Picks Perfect Line For Maya Angelou Stamp — If Only It Were Hers. Womp.

+ If you’re looking for some spiritual inspiration, and I think you might be, look no further: Iris Apfel Doesn’t Do Normcore.

Do you think our attitude about age has changed?
Not fast enough. Designers have completely ignored the over-65-year-old market. We have plenty of time and expendable income, and we can’t find anything to buy, because everything is designed for 15-year-olds. I mean, the youth market has to be served, but not with $5,000 dresses.

One day I’m going to be so old and opinionated and I just pray I have the statement necklaces to pull it off.

+ And this, my good friend, is your misandry inspo for the day: Without Their Words, These Vintage Ads Starring Women Speak Even More Loudly. :bath: :hatching_chick: :cake:

+ Have you checked your hummus for listeria? Just asking.

+ They’re making a Five Nights at Freddy’s movie, and I’m telling you this because when I showed Eli the story, he lit up like a Christmas tree, like someone had declared Moon Pies an acceptable breakfast food, and sometimes y’all have a lot in common with Eli.

Learning to be soft with oneself is no easy task. Learning what intimacy means both within oneself but also within others is no simple task. Being open to the intensity of an intimate moment, being able to sit with it and to take the time necessary to truly digest it is possibly one of the hardest concepts to grasp.

+ You Can Help 11 Films About Native Culture Win a Webby Award.

+ Person-on-twitter-whom-I-know-nothing-about-but-who-seems-rad, Rubyetc, has created this shark for you to use as a reply to idiots. It is very helpful.

shark you can use as a reply to idiots pic.twitter.com/P84k1Cj83h

+ This five-part webseries, Wildcats, landed in the tips section of my inbox recently and I gave it a go over coffee and a piece of toast.

WILDCATS is a comedic short series created by Rachel Puchkoff focusing on a group of young girls in High School. Specifically Allison, a Varsity Cheerleader who struggles with her sexuality while opposing sexist traditions at her school (and trying to work out if one caused the other) all while keeping up appearances and trying not to shit her pants.

I genuinely dislike a lot of things, but reader, I liked this. I don’t know what happened. I’d watch a full-length film of this webseries. Part Two is some brilliance. I didn’t want it to end.

Hey speaking of Five Nights at Freddy’s! Photo of the Day: When Penguins Attack. 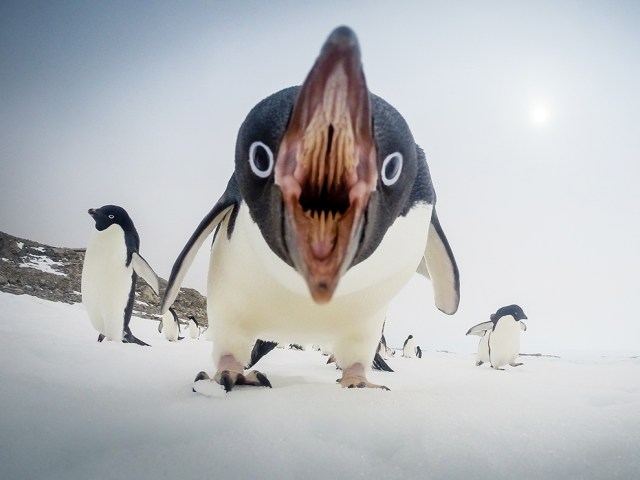 “This is what happens when you leave a gopro out on the sea ice.” Photo by Gordon Tait

Absolutely fucking horrifying. Have a nice weekend everyone!