Ummmmmmm I bought a pair of pleather pants over the weekend as self-care, so now I’m unfuckwithable. What are you doing shore up your Don’t Fuck With Me vibe this week?

+ Support Netizens: A Documentary About Women and Online Harassment! Do it.

+ Militarized police incite violence at Standing Rock. Water cannons, tear gas and rubber bullets were used against the peaceful, unarmed protestors late in the night, in freezing weather. The protestors had no way of immediately reheating and at least one elder went into cardiac arrest. He was resuscitated by onsite medics. Donate to the Standing Rock Sioux Tribe and the Sacred Stone Legal Defense Fund. 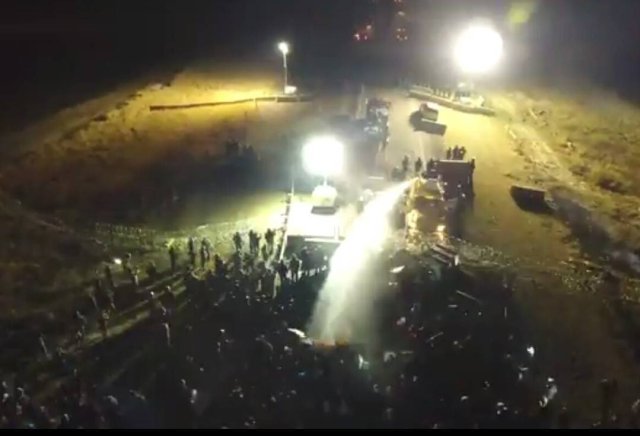 Drone footage of police using a water cannon on protestors while the temp hovered around 25° F.

+ First of all, Kate McKinnon and Kristen Wiig in the Whiskers R We skit from Saturday’s SNL. Bless us.

+ Inside the Military’s Working Policies on Trans Service Members.

+ Meet the Texas Lawmaker Fighting For Queer Youth (And Everyone Else).

+ How a Lesbian Chef is Breaking the Food Industry’s Glass Ceiling. BY BEING AWESOME AND A LESBIAN PROBABLY.

+ The Transgender Body in Art.

+ This is very thorough! How to Talk to Your Loved Ones About a Donald Trump Presidency.

+ Not Trump-related but really, really fucked up regardless: Michigan Officials Seek to Block Court-Ordered Bottled Water Delivery in Flint.

+ What are the Economic Costs of Deportation?

+ Hillary Clinton’s Popular Vote Victory is Unprecedented and Still Growing. This is from last week but, you know, relevant!

+ The Day After the Election, I Went Back to Work as an Abortion Provider, and I Won’t Stop.

+ More Women and Minorities are Signing Up for Self-Defense Classes Following Trump Win.

+ 10 New Traditions to Try Out This Thanksgiving. Not a single one of them is Hide In Your Bathroom Reading Autostraddle, but you could add that!

+ These photos of cats jumpinggg.