Dearest children of the corn, it is Monday! IT IS MONDAY. It is Monday and you are here, reading this. Welcome. Welcome to your week. What will everyone be talking about at your Thanksgiving celebration? Maybe you can punch up the convos with some of these topics! I’m gonna talk about lesbian separatists and GMOs. 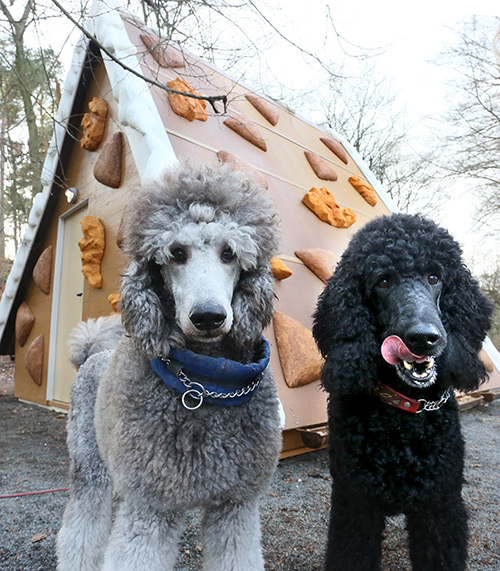 Look at this gingerbread house for dogs just look at it.

You Should Give Do Be

+ Maddie put together a great gift guide for you! Support These Queer and Feminist Causes In the Name of Someone Rad.

+ Oh look we have A ZINE FOR SALE OH HELL YEAH and a SCISSORING SWEATSHIRT.

+ In The Hospital, There’s No Such Thing as a Lesbian Knee by Kelli Dunham. This is so good.

When my partner Cheryl was dying from respiratory complications related to treatment for Hodgkin’s lymphoma, she was in so much physical distress she couldn’t bear to be touched.

The only contact she could stand — one of the few ways I could share my love with her — was for me to rub her feet. As I stood at the foot of her hospital bed doing just that, a scrub-clad figure we had never seen before poked her head in the door, curled her lip and demanded: “What is your relationship?”

+ Grad student Cheryl Abbate says she’s being targeted after ending a class discussion on the ethics of gay marriage.

+ Let’s Make Meat Loaf a Lesbian Icon THAT’S ALL YOU NEED TO KNOW. CLICK IT. Written by Vanessa Vitiello Urquhart.

+ Sweden Is Voting On a New Word For Girls Getting Off. They’re voting on that shit, y’all.

+ ‘No Victories Are Permanent’, Recalls Film About Feminism’s Beginnings by Eleanor J. Bader

It took award-winning documentary filmmaker Mary Dore—director of numerous films for PBS, New York Times TV, A&E, and The Discovery Channel—more than 20 years to raise the money to make She’s Beautiful When She’s Angry. But Dore’s efforts paid off: The film is an insightful, inspiring, and gripping look at the historical underpinnings of contemporary feminism.

From 1966 to 1971, She’s Beautiful When She’s Angry recounts, the notion that women deserved power and equality brought everyone—from seamstresses to secretaries, nurses to teachers—into the streets. They went into consciousness-raising groups, too, where they could discuss previously verboten topics such as heteronormativity and orgasms.

+ “I can’t think of a time when it was worse”: US Abortion Doctors Speak Out.

Glenna, 67, waits until her staff have had their say, before placing her hand gently on the arm of her husband. “Shall you say it, or shall I?” she asks; the two often finish each other’s sentences. “The story in the US is about bad clinics doing awful things, of violence against providers, and of women who are ignorant, thoughtless and irresponsible.”

Recruited as part of the first batch of legal abortion counsellors in Texas, Glenna joined Curtis at his first clinic, the Fairmount Center in Dallas, in 1974. Since then, she says, things have changed for the worse. “Women express more shame. I can’t think of a time when it was worse than it is now. I used to ask women how they first heard the word abortion, how they learned about it. There were always very personal stories about someone they knew, or found out had had one. Now, the first time they saw it was on some ugly billboard. It has been legal throughout their lifespan, not to mention their reproductive lifespan. But it has been completely politicised. ”

Curtis, 76, agrees: “Patients never came in talking about all this shame. They felt it was an OK thing to do, if they could just find somebody to do it for them.”

+ WHAT THE JUNK: Hogwarts Sorting the Lumberjanes oh lord yes you read that right.

+ Things to read while you’re hiding under the stairs/behind the shed/in the upstairs bathroom closet/down the street in a parked car*: The Longform Guide to Video Game Visionaries

+ The Secret Life of Passwords is so fascinating omg.

+ Betty Watson’s Basic Pot Roast — I made this yesterday. It was amazing.

+ Should I Put Eggnog In My Coffee? Important.