Sorry I was unable to get anything productive accomplished this morning because something AMAZING and BEAUTIFUL happened!! Maybe you heard? I MADE CINNAMON ROLLS. They were delicious.

+ Kristin Russo with LGBTQ Pride and the Sip-In from her First Person series with PBS:

+ Sally Kohn is still not getting married.

+ After Same-Sex Marriage, Then What? Pizza, duh.

+ I’m sharing this for you, for the greater good of the world. Pregnant Seeking Pregnant: My Very Particular Female Fantasy.

+ Maria Popova, who only brings goodness and light into this world, presents: MoMA Acquires the Rainbow Flag as a Design Icon: A Conversation with the Artist Who Made It, which includes full audio and you will not be disappointed.

+ GLAAD on being LGBTQ in the South:

+ What Will Gay Culture Look Like in 2035? LGBTQ activists and writers weigh in.

+ An Interview with Arabelle Sicardi. And speaking of Arabelle, Here’s What Happens When Some Yale Bro Steals Your Art.

+ Prison Born: What becomes of the babies of incarcerated mothers?

+ Well this is gross as fuck! The 13 Most Sexist Labels and Names in Craft Beer.

+ How a Historical Blunder Helped Create the Water Crisis in the West.

+ The Justice Department Compares the School-to-Prison Pipeline to Racial Segregation.

+ In Recently Burned Forests, a Woodpecker’s Work is Never Done. THANK YOU, WOODPECKERS.

+ The Perks and Pitfalls of Being a Famous Tree.

+ Why Parenting Advice is So Hard to Take.

+ 6/27 New York City: All-Ages Pride Party with Everyone Is Gay and Blue Stockings!

+ 6/28 Chicago: #AutoPride Meetup at The Parade 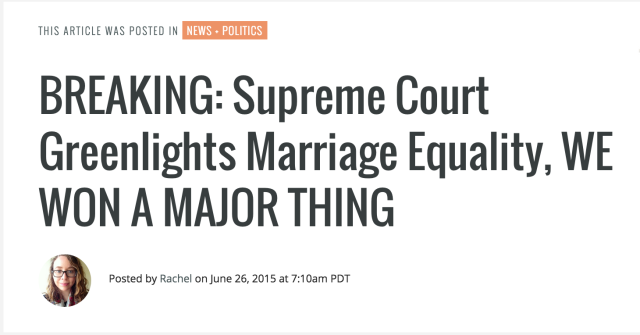