I made Hasselback potatoes on Sunday with some roasted garlic and a salad and HOLY BEES THEY WERE DELICIOUS. Here’s a smattering of 80 things we missed while I was clapping my hands together and giggling maniacally near my oven! Oh and heads up: I’m putting together a Very Special Halloween Link Roundup for tomorrow, so there aren’t any Halloween things here because TOMORROW.

+ Everyone Is Gay: On the Road!

Callisto is an open-source third-party sexual assault reporting system. Callisto allows sexual assault survivors to complete an incident report online, receive a clear explanation of their reporting options, and then either directly submit the report to their chosen authority or save it as a time-stamped record. Survivors saving a record can log back in at any time to officially report their assault or can choose to have their report automatically submitted to their chosen authority if someone else reports the same assailant. Callisto is designed to create a more empowering reporting experience for survivors and increase the identification of repeat assailants, who commit 90% of campus assaults.

+ Queer pastor, Nadia Bolz-Weber, is rad, made this video.

Using religion to justify bigotry makes me sad. Sending my support 2 the LGBT students at the school who I hope r able 2 find acceptance.

+ California public schools do an inadequate job of teaching students about gay and lesbian history, despite a 2011 law that requires schools to teach such lessons, according to a national panel of lesbian, gay, bisexual and transgender history scholars led by a Sonoma State University professor.

+ “She wanted to be normal. We both did.” Why gender, sexuality, and desire matter by Daisy Hernandez

A girl raises her hand. She’s at the back of the room and reminds me of myself when I was in high school (the big earrings, the acrylic uñas, the long hair tucked behind her ear). She asks, “Do you want to marry a guy or a girl?”

I want to tell her: “Girlfriend, I’d be happy to meet someone I like as much as my cat.” But I can’t say that, because these are teenagers. They are impressionable. They’re young. If I give them the wrong response, they might beat up a queer kid one day or not come out of the closet themselves. “For me, gender doesn’t matter,” I announce, painfully cheerful. “I’m attracted to who the person is on the inside.”

The moment the words are out of my mouth, I cringe. What I have said is bullshit and the girl knows it and I know it and so does everyone else in the room. It does matter—gender, sexuality, desire, all of it. If it didn’t, I wouldn’t be here talking about it, and Gwen Araujo would still be alive.

+ Megan Koester I implore you to come hang out on Autostraddle for while: I’m Trying to be a Bisexual But I’m Failing Miserably

+ Is Brooklyn Becoming Unsafe for Queers?

At the start of each new job, where I was almost invariably the only black editor on staff (unless it was a black publication—I have worked at a few), I would be heralded for my “voice” (and the implicit diversity it brought), until that voice became threatening or intimidating, or just too black. My ideas were “thoughtful” and “compassionate” until I argued, say, that having white journalists write the main features on a new black news venture sent the wrong message to the black online community. My editors disagreed.

Years later, in a conversation about Trayvon Martin with another boss, I said something like, “Racism is real.” My white boss came back with an answer that still astonishes me: “But you don’t experience racism, right? I mean, you’re attractive and educated—I can’t imagine that you would ever experience racism.”

+ Oh hey Lindy West has a thought: Give Me My Goddamn Echo Chamber Already

Not all opinions have merit, and not all ideas are just “different”—some are actively destructive, if not deadly, and unworthy of mainstream validation. And we, as people (and private companies), get to decide which ones we support.

Fuck neutrality. I want to win the culture wars. 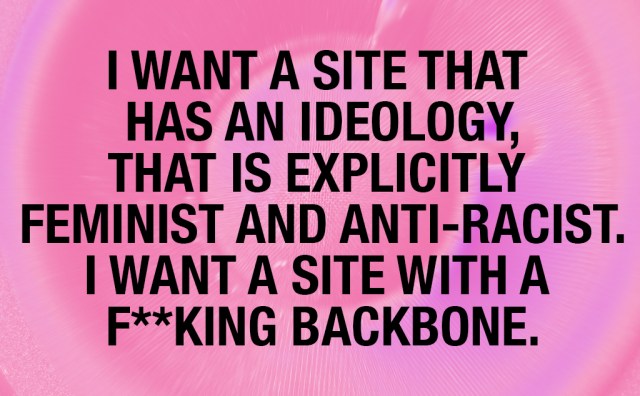 via the daily dot

+ How Should You Laugh at Renee Zellweger Today? because Jessica Goldstein is basically the only person who got this right.

+ You have to read When Women Stopped Coding:

The share of women in computer science started falling at roughly the same moment when personal computers started showing up in U.S. homes in significant numbers.

These early personal computers weren’t much more than toys. You could play pong or simple shooting games, maybe do some word processing. And these toys were marketed almost entirely to men and boys.

This idea that computers are for boys became a narrative. It became the story we told ourselves about the computing revolution. It helped define who geeks were and it created techie culture.

+ On the “All Jane, No Dick” comedy fest in Portland: Women-Run Comedy Nights Aren’t Killing Comedy. They’re Making It Better by Rebecca Waits.

+ An All-Female Mission to Mars by Kate Green, because women cost less in space, basically.

+ Where’s the “16, Parenting, and OK” Reality Show? by Gloria Malone. I’m obsessed with this.

When teen pregnancy and parenting is presented as a “female problem,” the financial obligations and responsibilities are placed solely on the woman. If the pregnant and/or parenting teen is a Black or Latina female, these stereotypical narratives are compounded with racialized biases: long-term poverty, single motherhood, and low education achievement. While white pregnant teens are often awarded celebrity status (i.e., they seem to more often become the “stars” of MTV’s teen parenting shows), pregnant Black and Latina teens frequently see themselves and representations of their families in hurtful public service announcements.

+ Too Fat to Swim by Ragini Nag Rao is an important reminder.

+ Rachel Maddow made a list of angry punk rock songs to get you through the midterm elections:

+ The Importance of Sharing Experiences

The authors speculate that this might be because the joy from an unusual experience fades quickly, but the sting of not fitting in because we didn’t share an experience with our peers—even a crappy one—lingers.

+ Spell Book of Beauty by Arabelle Sicardi is everything I didn’t know I needed to read. You probably need to read it, too.

+ UGH I LOVE THIS SO MUCH I WANNA EAT IT: Going to Movies with Girls by Elisabeth Geier

On the sidewalk outside of the Shattuck Theater in Berkeley, all the way through the tunnel from our small suburban town, Michelle, Alana and I went around in a circle and said what we liked least about one another. It was an exercise in honesty. Michelle said I made too many jokes, and Alana said I was too stubborn. I told Michelle it hurt my feelings when she acted differently around boys. I am almost positive both Michelle and I told Alana that sometimes she was too depressed, like it was a thing she was doing on purpose and could have worked on if she tried. We felt so mature. The Blair Witch Project scared me a lot, but I laughed through the whole thing. For months after it came out, Michelle, Alana and I would try to scare each other by standing silently in the corner of a room. It almost always worked.

+ Dear White People had a big weekend at the box office.

+ The 50 Most Horrific Family Relationships in Film

+ Make some homemade cookie butter with apparently literally any cookie you see fit. The world has never been so open and alive with possibilities as it is for you today.

TOILET PAPER ROLL CATS you can make on lunch break! 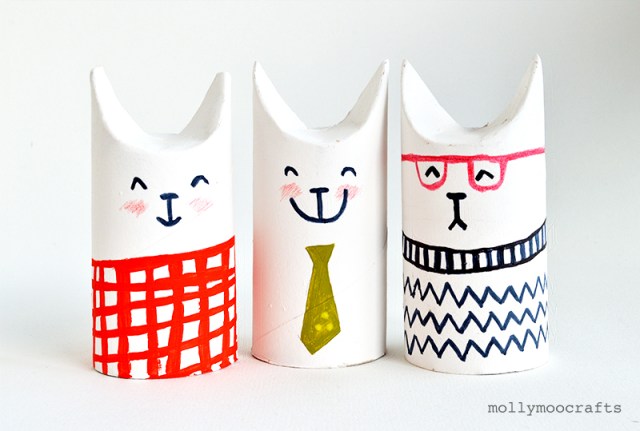