Happy Friday! There is more here than you can shake a stick at, so I hope you have several hours/sticks to dedicate to reading and thinking and sharing. Oh wow it’s like kindergarten.

She Is A Problem began over a year ago as an investigation into why, as a society, we are more comfortable with dead female artists than living female artists?

Six fellow female artists came together with the intent of creating an original work focusing on the lives, bodies of work, and suicides of Francesca Woodman, Sylvia Plath, Anne Sexton, Diane Arbus, and Kay Sage. What resulted was She Is A Problem, an immersive art gallery and performance piece that illuminates both the beauty in their art and the darkness surrounding their deaths. It also asks who are these women when liberated from an idealized Western suicidal facade?

QT*(queer and trans*) Liberation Camp is an opportunity for LGBTQ young folks in rural Ohio to get a chance to build some useful skills, connect with earth and a greater sense of self, learn about permaculture, art, dance, music, feminism, conflict transformation, and the political frameworks for collective liberation. Help me provide a paid summer internship program in collaboration with
Pay-It-Forward Farm. Five young folks will receive $150/week for their month long internship and take home as much organic produce as they want!

+ This comes to us from an A-Camper:

This is a plea to the most caring and understanding people I know on the interwebz, Autostraddlers….

A trans* friend of mine is currently battling cancer and on their own (physically incapable of working a full time job/without income and without a nuclear family-disowned) here in Seattle. They have been a hate-free and QPOC comedy leader, musician, writer, artist, and QPOC advocate on Seattle’s scene with endless fans, lives they have touched, encouragement they have given, and mentorship they have provided. They create dope ‘zines, write amazing punk/indie/hip-hop, run a hate-free QPOC comedy-variety show They cannot physically transition due to their cancer and at this time they are deeply struggling to pay for medical bills. If anyone has any questions about them or what they do, I am happy to answer any and all. If you can even give the $5 you’d spend on a beer after work to L instead, I will personally love you forever. L is truly an incredible human being and the Queer community NEEDS people like them in this world and their art needs to be shared- this is just the beginning. Thanks for taking the time to read.

+ Samantha Mesa Miles brings you this amazing piece, A Foot in Two Worlds: The Battle for Gay Marriage on Tribal Lands.

In recent years, as the national fight for same-sex marriage has made headlines, a quieter battle has taken place on Native American lands. To date, at least 10 tribes have formally approved same-sex marriage. These changes have occurred mostly in small tribes where lawmaking is more informal, and it’s easier to extend rights to gay couples.

What follows is the story of two tribes that have confronted the issue of whether to legalize same-sex marriage on their reservations and how they resolved it.

+ The Fader has The Real Faces of Fashion’s Non-Gendered Future and ugh these photos are AMAZING. 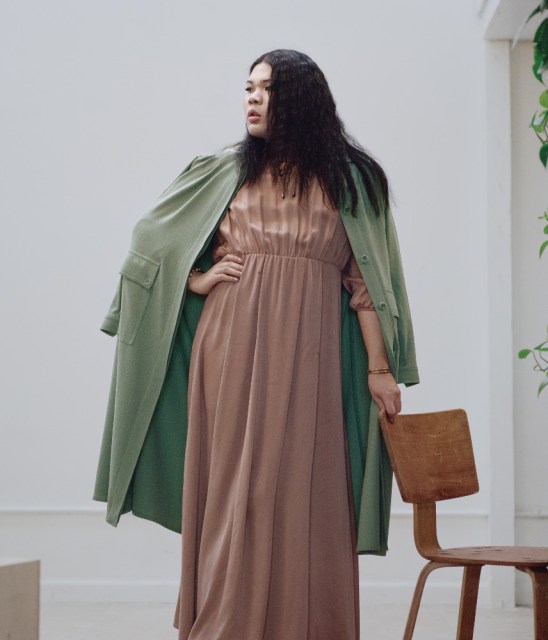 Kai is an incredible writer and performer who attends Temple University. Her work tackles issues related to race, misogyny, and queer identity.

+ Coming Out as Gay in Elementary School by Shannon Keating.

+ Where My Girls At: Meet Two of Ferguson’s Black Queer Activists, in which Erica Cardwell interviews Alexis Templeton and Brittany Ferrell for Bitch.

+ PFLAG Canada would like to make you cry buckets on this day.

+ How to Talk to Your Parents About Transitioning over at Rookie.

+ The Wells Fargo ad that will also make you cry:

+ Oh Francie Diep I love this so much: The Long History of Jeans in Women’s Protest.

+ I’ll Take Up All the Damn Space I Want by Octavia Paix.

+ How These Four Women In Tech Bridged the Gap from Ashley Nguyen.

+ How a Serial Killer Got Away With It from the brilliant Alex Ronan.

Why didn’t they tell the community for so many years?
When I asked former Police Chief Bernard Parks, he said, “Oh, we didn’t want to tip off the serial killer.” And I was like, “Really … what, for 20 years?” They put this whole community in danger. Many deaths could have been prevented.

Police reports suggest only one woman escaped. Were you surprised to find others?
I was amazed. Because the police are so out of touch with the community, they really don’t know whether a certain number of women are alive or not. The women are terrified of the police, so they don’t go and say, “Well, actually I’m alive and this is what happened with Lonnie.” They’re worried about getting booked for being on the streets.

+ Does Race Matter if Books Like Anne of Green Gables Touch Your Heart? by Patrice Gopo.

Since becoming a mother, I’ve pondered if the race of fictional characters matters. Montgomery’s books spoke something into my childhood soul that resonated regardless of Anne’s skin color. Maybe I was drawn to Avonlea because that world didn’t raise issues that brought me embarrassment and pain. Now, with a young daughter who will soon find her own favorite titles, I am aware of the complex messages she will get from books with, and without, black characters. Her temptation may also be to avoid painful story lines and flee into happier worlds. Instead, I want to help her understand that black characters, like every kind of character, can live a gamut of experiences.

+ Mary Emily O’Hara and The Sex Workers Victimized and Exploited by A&E’s “8 Minutes”.

Black women who continue to center Black men are effectively forced to participate in their own erasure. Patriarchy has conditioned Black women to fear racist exploitation more so than sexist exploitation, and any perceived racist threat to Black men provokes a circling of the wagons. But Black men, and only Black men, benefit from the prioritizing of racism over sexism when it comes to activism in the Black community. While Eromosele’s particular lived experiences may leave her with the feeling that Black women are “privileged” and should act as “allies” of Black men, the reality is that Black women occupy a social status lower than that of white men, Black men, and white women. We are in no way privileged over Black men in regards to police brutality, and we have just as much to lose in escalating an altercation with law enforcement. To believe anything less is dangerous.

+ This is great: Emily Warman interviews actress and model Hari Nef for Paper.

What do you think it is about Tumblr that makes people want to reach out to you in this way?

I post things on Tumblr I wouldn’t dream of posting on Instagram or Facebook or Twitter. The thing about Tumblr is that it’s even more focused around youth. “Grown-ups” don’t go on Tumblr, really. A lot of the people I interact professionally in New York, most of them aren’t on Tumblr. When I’m on Tumblr, I’m talking to people who generally are not in New York, who are isolated and dispersed around the world but all come to the same place based on identity or things they love or aesthetics they appreciate. I think it’s a really good platform for kids whose immediate community isn’t necessarily cutting it for them. You can carve out a little chunk of cyberspace. It’s cultural production and it’s accessible to anyone who wants it. I would not be where I am now without Tumblr and without my Tumblr followers. They’ve inspired me and helped me do so many things. I feel a little dorky being like, “My Tumblr!” but I think it was the original playground to experiment with myself.

+ Many Organizers at the Forefront of Protests Are Women, Despite Men Taking Center Stage by Caitlin Goldblatt.

+ Lina Nilsson on How to Attract Female Engineers.

+ These Women Are Changing the Face of Whiskey! I am changing the face of myself by having some mint tea and turning my frown upside down, so I have a lot in common with these women I think.

+ Tips for Hiking in Rattlesnake Country.

+ How Wealth in Childhood Shapes Personality Later in Life by Jessi Streib.

+ As a person of a certain age, this is enthralling: The Rise and Fall of Abercrombie & Fitch, as Told Through Its Patents from Francie Diep.

+ I don’t know this shit is interesting. The Labyrinth Revival: Why entangled pathways are increasingly being built in hospitals, spas, and prisons.

+ Why Millions of Americans Feel Like They Have No Power Over Their Lives.

+ Today in What The Fuck: Harvard Survey Reveals What Young People Really Think About #BlackLivesMatter and 2016.

Look at these megasmart, world-changing babes in Madison Tuesday night!

Our folks had so much fun at UW Madison today! Y'all were great, JSYK.