Heyyyy-o it’s your second roundup of links for the week! Remember Monday? We were just babies then! It felt like we’d never graduate and our hair would always be in style. Those were the days. Here are some things we missed while I was looking for my Whip-Smart CD. 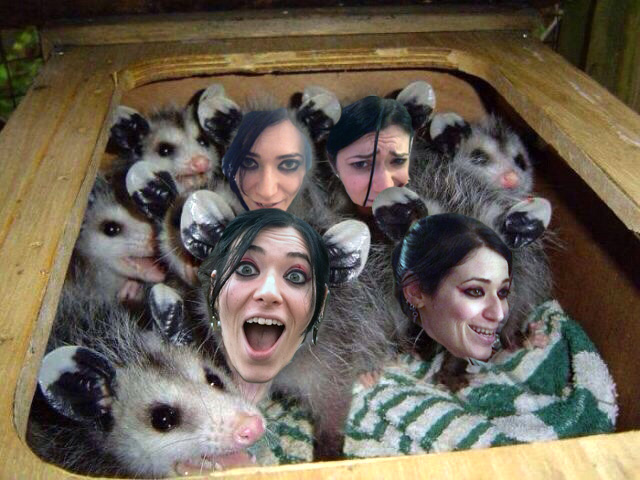 Me: “Can you turn this box of rodents into Stef possums?”
Intern Raquel: “Absolutely.”

You Should Do Give!

+ Blavity has an interview with the overly talented, badass heartthrob Brittani Nichols on her webseries and pilot, Words With Girls, and you want to read it right now.

The whole process forced me to step up and become comfortable expressing my opinions and telling people I really care about certain things which initially made me uncomfortable because much of my life thrives on appearing chill but having a constant undercurrent of anxiety coursing through me like a raging river so when I have to convince people of something, I can go from v. chill to v. intense but still in a kind of chill way I like to think.

Need more Brittani in your life/ears? Try these podcasts: Pulling It Together and Pizzacast!

+ On divorce and moving on: When There Is Nothing Left to Burn, You Have to Set Yourself on Fire by Ashley Riehlin

With no assets holding me back I found the freedom to move anywhere, to pursue any job I wanted, to truly discover who I am. After experiencing the biggest failure of my life, failure became a lot less frightening. Once you’ve fully experienced that of which you were most afraid, it forces you to re-evaluate the idea of fear in the first place. Why allow yourself to be controlled by fear when in the end, it doesn’t protect you? I realized that vulnerability and the courage to share your truth are of the utmost importance to me. Voice your struggle; put yourself out there; own your truth. When you expose to the light of day the darkness you otherwise would harbor, life becomes much less heavy.

+ The Impact of the Affordable Care Act on LGBT Communities

+ Gay Rights Are Great, But Ixnay on the PDAs. Pffffft. I mean normally IDGAF what straight people think about me but I guess it’s like, relevant or whatever.

+ A Look at How Media Writes Women of Color by Victoria Law.

Another popular tweet pointed out the whitewashing of Harry Potter. Yes, Harry Potter, that story of the boy wizard who saves England (and the rest of the world). In the first three Harry Potter films, black actresses play the character of Lavender Brown. Her role is very small in those films—she doesn’t even have a speaking part—but when she becomes a significant love interest in the sixth film, the film producers replaced her with white actress Jessie Cave.

+ University of Tennessee Drops ‘Lady’ From Women’s Sports Teams and some people are upset about it, which I bet you totally didn’t see coming.

+ Aaminah Shaku has this fucking brilliant piece on The Toast — Not Your Idea: Cultural Appropriation in the Birthing Community.

Parents of color often talk about how we are met with two common reactions when we do things that we have reclaimed as part of connecting with our own cultures. Either people tell us that we are “backwards” and that these things are “primitive,” they tell us that there is science (because what our ancestors did obviously was not based in any science) and new theory, etc. Or they exoticize us and our cultural practices wanting to hear all about it and, if we are open to sharing, they suddenly become “experts” on the subject and we shortly thereafter find them teaching or writing obnoxious articles such as the one linked here. Much like many other “natural parenting” methods that have become popular again in white cultures, there is little introspection of how colonization has tried desperately to break families of color from breastfeeding, babywearing, and other traditional healing methods.

+ The LGBT+ Society at the University of Bristol Union is putting up some new bathroom signs. 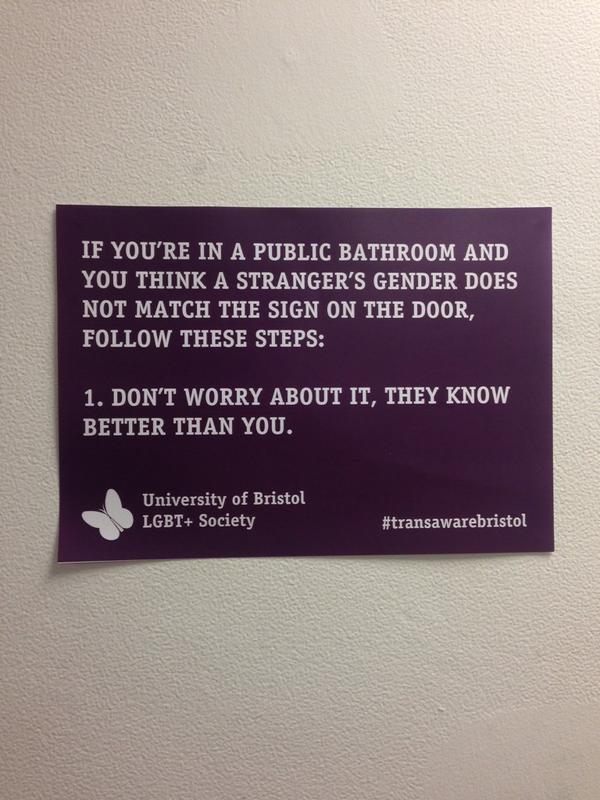 We’re all about it.

+ Shaking Off the Haters Won’t Solve Online Harassment by your girl Ann Friedman.

+ 25 of Music’s Most Misandrist Themes YESSSSSS.

+ And 10 Female Outsider Artists You Should Know.

+ The Cut is doing a week-long situation on women’s complicated relationships with beauty standards and it’s called Pretty Hurts, which, fuck me silly, that title is genius.

+ Sigh. Why No One Can Design a Better Speculum with Rose Eveleth.

+ How to Successfully Hijack Your Family’s Thanksgiving la la la.

+ The Importance of Scaring Children from Shirley Li. Preach.

+ The United States of Thanksgiving gets pretty much everything wrong and of course we are UP IN ARMS about it. At least I was. Tennessee got brussels sprouts?? New York Times y’all are fucking crazy.

+ Why It’s Illegal to Use Milk Crates For Anything Besides Milk. Well just look at you, learning a new thing every damn day!

+ This isn’t new and I don’t remember how it came into my life, but I thought you’d love it. Notes on Excess: Frenetic annotations on self-indulgent immoderation by Ana Cecilia Alvarez

A friend——ashamed after years of awkward sufferings from a body she felt was disproportionate, breaching its allotment——shared with me her mantra, which I have since kept close: TAKE UP SPACE.

+ Jesus this is fascinating: The History of Abortifacients with Stassa Edwards.

+ Don’t Forget Why Marijuana Legalization is Winning by Maia Szalavitz:

The mid-term elections prove that support for legalizing weed continues to grow. But progress has been rolled back before—it’s important to remember how we got here if we’re to keep moving forward.

+ Um… Fantastically Wrong: Unicorns Dig Virgin Women, And Other Lessons From Medieval Bestiaries. So. There’s that.

+ “All Indians Are Dead?” At Least That’s What Most Schools Teach Children by Alysa Landry. This piece is just the tip of a god-awful iceberg.

The project began when Shear was teaching an undergraduate class in multi-cultural education. When she asked what students knew about America’s indigenous people, hands shot into the air.

“What they told me is that they learned about Thanksgiving and Columbus Day,” she said. “Every once in a while a student would mention something about the Trail of Tears. It was incredibly frustrating. They were coming to college believing that all Indians are dead.”

I really hope this doesn’t come off as condescending, but maybe us non-Native Americans should consider this incredibly small and simple mission: brush up on some basic facts about Native people in your state and share that information with a young person, or anyone who’ll listen, really. Start a damn conversation! Thanksgiving is a perfect — if also weirdly super fucked up — time to bring up the topic of Native realities with kids, since they’ve likely been listening to the same bullshit watered-down version of history in school that week, without the benefit of present-day context or even the actual truth. Kids want honesty and Native people deserve so much better than this.