It can be hard out there for a queermo gamer. Sexism, racism and homophobia in the larger gaming community aside, it’s just plain hard to find games that feature queer characters or roleplaying games (RPG) that allow players to queer up their own characters. For every simulation game like The Sims, which has been helping us live out our queer suburban fantasies since 2000, there are dozens of other mainstream games that… well, focus on things besides sex and romance. While it’s not necessary for a game to define the relationship and sexual norms of its world, you can bet the players think about them. If there’s anything I’ve learned from my years as an awkward, questioning teenager with unsupervised internet access, it’s that there’s a sexual sub-subculture to every subculture.

This isn’t to say that developers aren’t trying to bring sex and sexuality into games. BioWare’s Dragon Age 2 received a lot of criticism from straight male gamers for its romantic plotlines and openly gay characters (in one especially harrowing part of the game, a male character flirts with the player even if the player has chosen to roleplay as a man). The backlash is gendered and misogynistic in two parts: first, writer Jennifer Hepler, who wrote some of the romantic plots of the game, was harassed until she ultimately left BioWare, a depressingly familiar narrative for women in gaming; two, in the same way that the Romance section in a bookstore is considered full of bad literature for frivolous women, serious narrative devotion to romance and erotica in a game is “something that somehow drains roleplay gaming of its grittier essence and threatens to drown epic storylines in cooties.”

Backlash aside, games that distance themselves from their romantic and erotic subcultures also tacitly reinforce the problems within our own sexual culture. When left to write their own rules, ERP communities tend to mirror their real-life counterparts: kink-positive but with a double standard against women, heteronormative and full of casual sexual harassment (even in-game, a male avatar can pursue a female one relentlessly). They’re based off the norms that we know, even though the settings are fantastical and their social structures are completely different. Addressing these norms head-on is a way to expand the world that the game is building, and also to challenge our cultural norms around sex. Plus, in order to fully realize a queer character’s queerness, we’re gonna have to talk about sex, baby. Or hint at it. Or at least acknowledge that it exists.

So what is there to play if you’re a gamer, or you’d like to get into gaming, and you’re looking for a queer, sex-positive experience, perhaps with less combat than your average mainstream console game? No worries, friends, I got you. With a little help, I’ve put together this list of hot indie games that are based on queer premises or evoke some queer eroticism, in genres that range from the traditional pen-and-paper tabletop to fun and simple logic puzzles. Happy gaming! 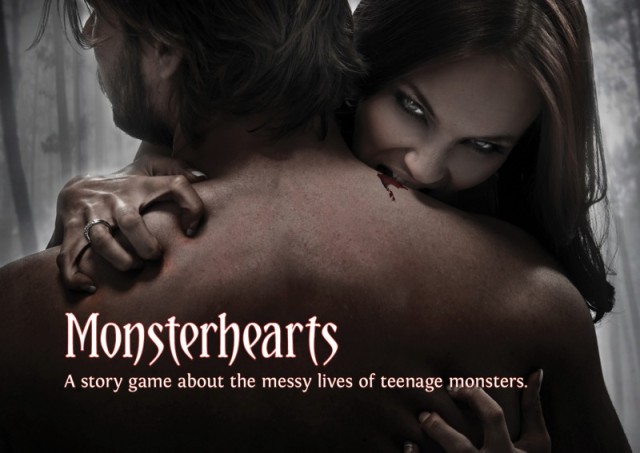 Monsterhearts is a pen-and-paper tabletop game set in a supernatural high school, about “the confusion that arises when your body and your social world start changing without your permission.” Players play as various monsters with teenage struggles, and it’s especially primed for queer relationships. Anyone can “turn on” anyone else, and all characters have specific sex moves associated with their class, which help or hinder them in gameplay. As it says on the website, “If you like supernatural romances, or stories of monstrosity and personal horror, or if you just like watching sexy people ruin their lives, then you’ll love this game.” Its creator, Avery Mcdaldno, also wrote Dream Askew, a tabletop game about creating and maintaining a queer community during the apocalypse. 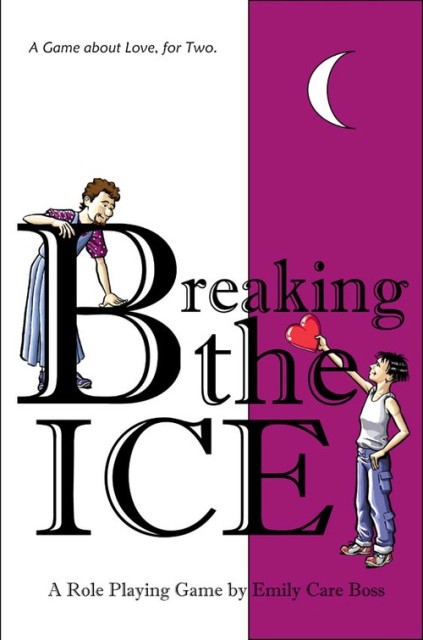 If you’re just getting into tabletop role-playing, Breaking the Ice is a great way to start. Create your character, then play out their first three dates with another character and see if they end up staying together. You can expand it to include more people, and if you’d like to play on, creator Emily Care Boss made two sequels, Shooting the Moon and Under My Skin. 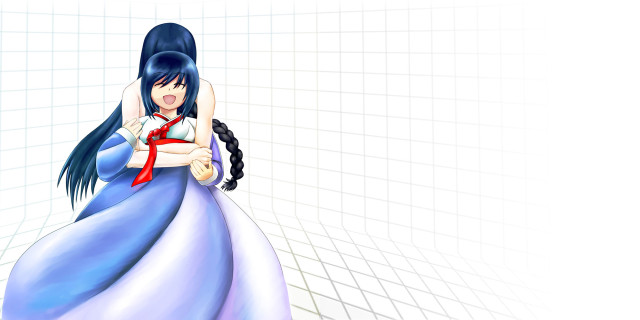 A decision-based visual novel, Analogue: A Hate Story, explores the mystery of what happened to a futuristic spaceship society that became increasingly patriarchal and misogynistic before the spaceship went dark completely. The story deals with human-computer interactions, interpersonal relationships and LGBT issues, while also featuring “transhumanism, traditional marriage, loneliness, and cosplay.” Christine Love, the writer, has also created Digital: A Love Story, a mystery/romance set on a late-80s computer, and don’t take it personally, babe, it just ain’t your story, a game that follows the “erosion of privacy, gay drama, young sexuality, and the perils of modern online life” in a prestigious high school.

4. Until Our Two Alien Hearts Beat As One 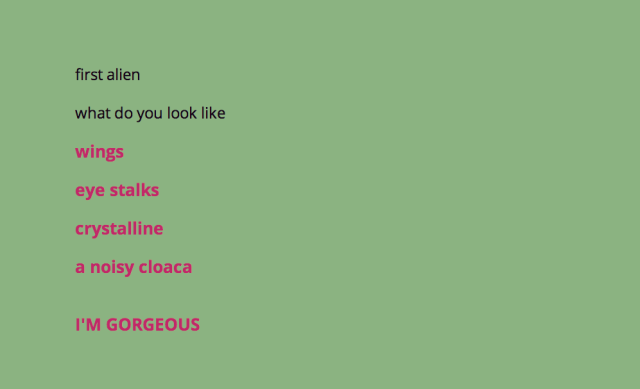 A text-based multiplayer browser game, Until Our Two Alien Hearts Beat As One lets players create beautiful alien creatures with tentacles or flippers or compound eyes and then try to interact with each other across cultural language barriers. Creator Porpentine has made many strange, thought-provoking games, including howling dogs, an interactive story of escapism, texture and feelings, and Cry$tal Warrior Ke$ha, a glittery space adventure where you play as Ke$ha during and after one of her concerts. Triad is a simple sliding puzzle that tries to solve the question of how to fit three people into a bed that isn’t made to hold three people. Creator Anna Anthropy has made quite a lot of queer games, including Encyclopedia Fuckme and the Case of the Vanishing Entree, which comes with the warning, “There’s some filthy nasty dirty stuff here.” She also created dys4ia, an autobiographical game about her experience with hormone replacement therapy. 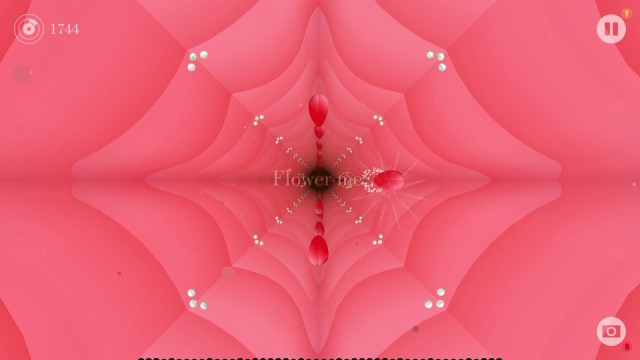 Luxuria Superbia is a “simple game of touch, pleasure and joy.” It’s a multi-sense experience with music, touch-based play and beautiful visuals. As a player, you try to cultivate flowers of various colors in a garden. The game is deliberately sexy; the instructions state that “it responds with lush colors and poetic seductions. Touch all twelve flowers in the way that they like.” It’s one of the most weirdly sensuous games I’ve ever played, and I’m into that. 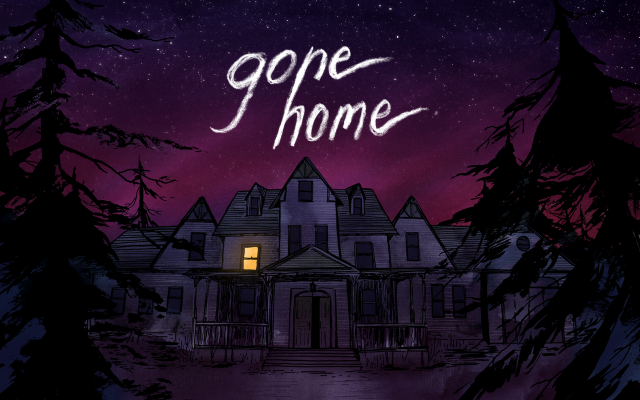 via The Fullbright Company

Oh wow, y’all, Gone Home. If you haven’t played it yet, pop a Red Bull, pop on over to the website (or Steam) and get this game, then don’t sleep until you’ve finished it all. It’s a story exploration game that follows Kaitlin, who’s returned home after a year abroad to an empty house. Through a series of letters and clues, the player discovers what happened to her parents and her younger sister Samantha. It’s haunting and emotional, and it cut straight through my queer robot heart.

What are some of your favorite games that include queer storylines or eroticism (or both)?