As you queermos may know, Autostraddle dot com is a thing that occurs on a shoestring budget on the internet, and as such we don’t really have a real office in a skyscraper in Manhattan or anything like that. Rather we’re just a group of weirdos in our pajamas emailing each other frantically at all times of the day and night, just trying to make the revolution happen, one tiny post containing images of cats drinking whiskey at a time. Sometimes the daily editorial email – with senior editors, content editors, contributing editors, and interns – is pretty quiet, with all of us going about our business writing words and occasionally showering and all that jazz, but some days we get really talkative. You never can tell what will inspire us, but once we’re off it’s true magic.

and also about how marilyn manson was totally NOT just an alice cooper ripoff and WHY AREN’T YOU GUYS MORE SCARED OF ME UGH I DIDN’T ASK TO BE BORN IN THE FIRST PLACE.

What happened next was a thing of beauty, pride, and joy for all of us. From 11:13 PM – 11:51 PM we exchanged no fewer than 30 emails, all revolving loosely around Marilyn Manson and what exactly he means to each of us on an individual level. The conversation continued long after 11:51 PM, but the highlights relating to Manson were really packed into that 38 minute span, and we felt it was very important for you to see the way the brilliant minds that bring you Autostraddle dot com day in and day out react when they see / hear / feel the name Marilyn Manson. Perhaps you have some additional thoughts to add; please do. 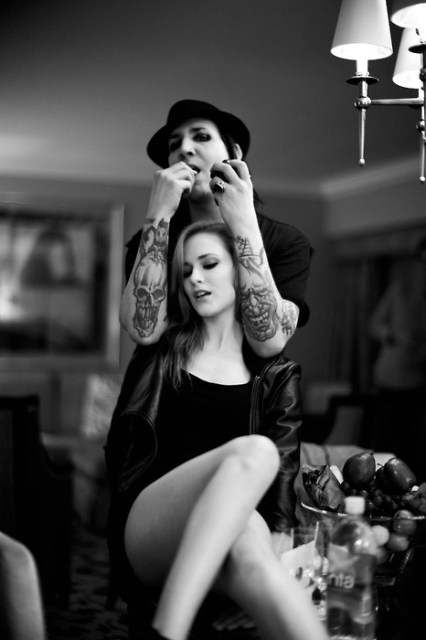 I personally was really happy when they broke up does that make me an asshole? I mean I didn’t want her to marry Billy Elliot I wanted her to come date ME.

1. Marilyn Manson always terrified me. no longer ashamed to admit it.

2. Being Jewish and listening to “Antichrist Superstar” is so anticlimactic.

4. I was v scared of Marilyn Manson and v upset that he was dating Evan Rachel Wood Bisexual.

5. I have experienced the same feelings as Vanessa re: fear and Evan Rachel Wood Bisexual.

6. Once my dad liked one Marilyn Manson song which doesn’t make any sense unless you assume my dad doesn’t know who Marilyn Manson is, which I guess is actually totally possible. My dad is a tea party member y’all.

7. “Personal Jesus” kind of freaked me out a little bit in a way that everything freaks you out when your whole bedroom is windows and you like leaving your shades open in the dark while you listen to 101.7 WFNX With Paul Driscoll.

9. I also had Marilyn/Charles confusion in my youth! Is this an intern thing?

10. I also heard Marilyn Manson is joining the cast of Once Upon A Time super recently and honestly  I’d just rather have more Mulan/ladies tbh.

11. I believe Marilyn Manson was also featured in Eastbound & Down. Not that I watch that show.

12. I was so confused by the Marilyn Monroe vs Marilyn Manson thing. I mean, they had the same first name. I also knew that the president was somehow tied in and therefore thought Monica Lewinsky was the same magical person. Confusing times with M names.

13. All I know about Marilyn Manson is that he bit off the head of a bat while he was on stage at a concert. Or a puppy. But probably a bat.

14. Wait I thought that was Ozzy Osbourne.

15. Wait I thought it was Alice Cooper.

16. Okay I know less than nothing about Marilyn Manson.

17. Marilyn Manson might have been the very first thing I deemed white people shit. Ah, the joys of youth.

18. Is it weird that I had a crush on Marilyn Manson back when I was like 12/13 and I didn’t know his gender and that was my favorite thing about him?

19. No one is leaving until I find out who (allegedly) bit the head off of what.

20. I wish we could put together a listling of “things we emailed each other in rapid succession when Stef brought up Marilyn Manson.”

21. …Should I know who Marilyn Manson is?

Vanessa has written 338 articles for us.